Everyone Deserves Fair Treatment
REACH OUT FOR A CONSULTATION 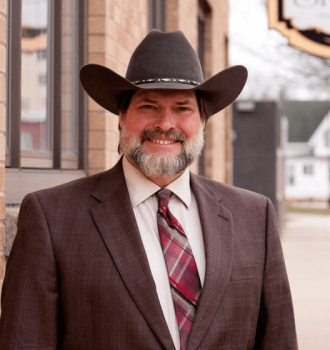 Attorney Ted Skemp was born and raised in La Crosse, Wisconsin. He graduated from Aquinas High School in 1983. He received a Bachelor of Arts Degree in History from Marquette University in Milwaukee, Wisconsin, in 1987, and his Law Degree from Marquette in 1990. Ted practiced at Hale, Skemp, Hanson, Skemp & Sleik from 1990 to 1993 and at Wright & Skemp from 1993 to 1996. Ted has been a solo practitioner since 1996. He is a member of the State Bar of Wisconsin and also admitted to practice in the U.S. District Court, Western District of Wisconsin.

"My goal is to help you overcome your legal issues so you can get your life headed in the right direction."

Ted lives in La Crosse with his wife and two children. He is an active member of St. Joseph the Workman Cathedral and the Knights of Columbus. Ted is currently the Vice President of Disability Rights Wisconsin and has been a Council Member for Citizen Advocacy La Crosse for 15 years. Ted was a Post Leader for the Boy Scouts of American for several years. He also co-founded the La Crosse Storytelling Festival in 2003.

While in law school, Ted played rugby for the Milwaukee Men's Team